Prolift Access were back to help the world’s top graffiti and street artists give Bristol a stunning makeover at Upfest 2017 this weekend.

More than 300 artists visited the city to create their masterpieces on the sides of buildings and venues across Bedminster and Southville.

Prolift’s Bristol depot supplied 10 of their Skyjack diesel scissor lifts for Upfest, giving the artists a safe work platform and enabling them to comfortably reach heights of up to 50ft.

Prolift also supplied a JLG 800AJ – an articulating diesel boom lift with a maximum platform height of 80ft – to help Brazilian artist Eduardo Kobra create a spectacular technicolour portrait of John Lennon on the wall of the Tobacco Factory. 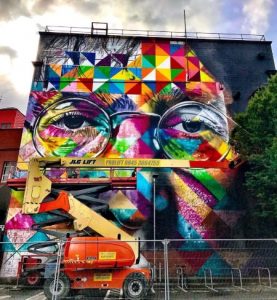 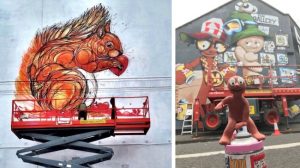