In the late 1970s he worked as an engineer with the fork truck manufacturer Lancer Boss but in 1981 he was recruited by the aluminium scaffold tower manufacturer and rental company Access Equipment as a development engineer for its budding powered access division Zipper which was in the process of developing a trailer-mounted lift. He started on the same day as Malcolm North, who was to join him on the project – North went on to become engineering manager at Niftylift.

In 1987 Access Equipment went into administration after it, and its owner Moss, ran into difficulties. Access Equipment had been an UpRight scaffold licensee for many years, building the Zip-Up branded alloy towers. So, when it went into administration UpRight stepped in and acquired it, later merging it with its John Rusling business to create Instant Zip Up. However, it did not take the Zipper powered access business this was acquired by Access Equipment’s managing director Melvyn Else, and as an engineer with that part of the company Chris Caney joined with Else who had formed Zipper Power Platforms, which manufactured a range of access platforms, and specials and also became the Marklift boom and scissor lift dealer for the UK. Caney focused more on the aviation market building truck mounted scissor lifts and other specials and in 1995 moved to Instant Zip-Up – later UpRight UK – joining its Leighton Buzzard depot as a new equipment salesman, with a particular focus on the aviation market.

In 2002 he and his junior salesman at the Leighton Buzzard depot Duncan Howard were persuaded to leave to set up a sales business alongside Richard Miller and Brian Fleckney’s new rental company Panther Platform Rentals – Panther Platform Sales Ltd. Eventually the two decided that they would be better off doing their own thing and named it Platform Sales and Hire instead.

The venture was essentially a sales company and as in the past Caney built up a strong aviation business building truck mounted scissor lifts for which it used the Flying Carpet branding after the well known UpRight scissor lifts of the 1970s and 80s.

After building up a small – 10 unit – rental fleet the two owners made a bold decision in 2010 when it acquired Milton Keynes based access rental company BAR and its 75 unit rental fleet. The two built the rental business at a steady pace so that when they sold out to Speedy last year, they had a fleet of 850 aerial lifts and 65 staff working from three locations with revenues of nearly £10 million.

Since selling the business Caney has continued to run the specialist sales division within Speedy, as part of the deal, one year on and having reached the ripe old age of 65 he officially leaving the company but will remain on as a consultant for the aviation business. 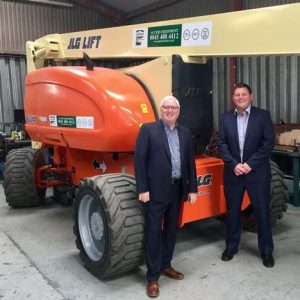