Prolift Access managing director Andy Pearson is planning to cycle more than 400km to this year’s APEX 2017 show in Amsterdam.

Andy is planning the three-day charity ride to raise money for the Lighthouse Club, which provides support to construction workers and their families.

But he’s keen to hear from anyone else interested in taking part.

Andy said: “Day one is a 143km route. We start early at Royal Tunbridge Wells, heading for the ferry at Dover which will take in a short climb up to the top of the famous white cliffs.

“After crossing the English Channel, we’ll cycle the short ride from Calais along the coast to Dunkirk for our first overnight stay.

“Day two takes in three countries over 125km. From Dunkirk, we’ll head along the coast into Belgium and then inland towards Bruges. We’ll finish the day by cycling into Holland for an overnight stop at Middelburg.

“The grand finale on day three is a 170km flat ride towards Amsterdam, passing Rotterdam and The Hague.”

The charity ride is due to start on Saturday, April 29, arriving in Amsterdam on Monday, May 1 – the day before the start of the show at the Amsterdam RAI Convention Centre. 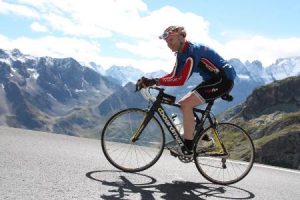